FRA Co-founder Gordon T. Long is joined by Mish Shedlock in discussing the rigging of gold and silver by Deutsche Bank and the reliability of so called “casino banks” and the state of global banking institutions.

Mike Shedlock / Mish is a registered investment advisor representative forSitkaPacific Capital Management. Sitka Pacific is an asset management firm whose goal is strong performance and low volatility, regardless of market direction. He is also a contributing “professor” on Minyanville, a community site focused on economic and financial education. 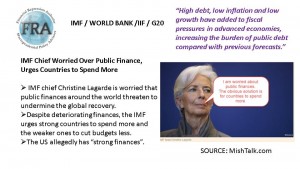 She said the “strong” countries need to spend more and used the US as an example, but the US deficit projections don’t look very good. In fact, we can’t find anybody anyplace that does look good.

“It is just a bunch of hooey attempting to show concern while giving countries another reason to go deeper in debt.”

There’s all these emergency meetings happening and causing a lot of rumors.

French President François Hollande had a public meeting recently. He said, “I think things are getting better”, and was interrupted by a journalist who said “Excuse me, Mr. President, is that a joke?”

“That’s just what we need journalists in the US to do; ‘Excuse me Mr. President, is that a joke?'”

All the big Italian banks were gathered and told to chip in to bail out these other banks that were in trouble. What they came up with was a plan to increase the capital on these small banks by €5B Euros. Supposedly this would fix €360B in non-performing loans. There’s also roughly another €180B in bad loans.

“They’re supposed to fix this huge problem with the Italian banking system with €5B. That doesn’t work.”

Everyone suspected that they were cheating on gold trading, and they admitted manipulating the gold and silver market in a court of law. It’s like someone commits $100B worth of fraud and get fined $50B and promises to never do it again. That’s not even like paying the full price.

“My position all along was, yes, they’ve been cheating, but where isn’t there cheating… I’m quite positive it’s in both directions.”

Has there been this overall price suppression on gold and silver? Gold got up to €1900/ounce, and silver got to €44-46/ounce, and is now sitting at €15-16. Was there pressure applied by all the banks? Is gold really down or was there manipulation because the banks were generally on the other side of the trade?

“Is gold about where it would be without this manipulation? I don’t know, and nor does anyone else.”

What we saw was Deutsche Bank had €500B+ in derivative profits and roughly €480B in current losses, so roughly €20B ahead. On another page they outline all their derivatives positions and it amounted to €21T. That’s a profit of €20B from €21T in notional values. These are values way out of the money and some of it is genuinely off.

“When you’ve got a €21T casino on your balance sheet, it just goes to show you how much banks aren’t banks.”

For all the rigging, they got caught on gold and silver. Their commodities portfolio of derivatives was only a tiny piece of that €21T, compared to €15T in interest rates derivatives or €5T in currency derivatives. Something is clearly wrong with all these casino banks.

The international swaps marketplace is approximately $600T, compared to the US economy of $25 GPD a year. Most of the magnitude is more than the entire global economy. The risk is way greater than everyone thinks, especially with these credit default swaps. 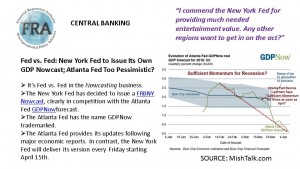 Inflation is probably a lot higher in a lot of places than the CPI admits.

When 24% of the CPI is Owner’s Equivalent Rent, that doesn’t make sense. Rents in Cleveland and Illinois have nothing to do with rents in Seattle, or places where the economy is doing a lot better. They average it out and supposedly this is some sort of aggregate number that tells you it only goes up by 1.7%. I don’t believe these prices can aggregated because there is no basket that we can define as suitable for everyone, but this is what the Fed does and everyone hinges on these numbers.

“We’ve got too much inflation, too much wealth concentrated in the hands of all the people making the money, while the average guy is losing out.” 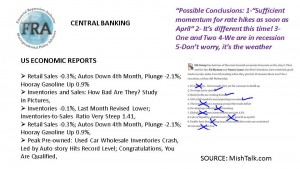 A lot of these charts peaked around November 2014, then there was a little rise back that didn’t recover all of it, and another plunge. Factory sales are down 13 out of the last 16 months, and there’s more things participating now. For instance, auto sales are down 3-4 months in a row. Inventories are at an all-time high. Everyone’s traded in their car; used car inventories are at an all-time high.

35% of all autos sold are on lease, and the residual value of used cars are plummeting. Someone has to take a massive write down since they’re all traded as ABS in the shadow banking system. The US government are the biggest owner of used car assets with $1.1T since they buy all the collateralized loan obligations etc. that go through the government.

LIKLIHOOD OF A RECESSION

“I am still sticking with my forecast that says the recession started in December 2015. I see no reason to revise that.”

We might not know for a year, especially if it’s a small recession. The official harbinger is the NBER, and they get to call when we get it, but we’ve had a recession that ended before they called it. They’re always late. Nothing is coming out of these reports that indicate the call was wrong.

“We’re certainly not in a very strong economy, and there’s no reason to believe it’s going to get any stronger.”