Dr. Lacy Hunt joins FRA Co-Founder Gordon T. Long in an in-depth discussion on the current debt dilemma and the decisions of the Federal Reserve. Dr. Lacy H. Hunt, an internationally known economist, is Executive Vice President of Hoisington Investment Management Company, a firm that manages over $5 billion for pension funds, endowments, insurance companies and others. He is the author of two books, and numerous articles in leading magazines, periodicals and scholarly journals.  Included among the publishers of his articles are. Barron’s, The Wall Street Journal, The New York Times, The Christian Science Monitor, the Journal of Finance, the Financial Analysts Journal and the Journal of Portfolio Management.

Previously, he was Chief U.S. Economist for the HSBC Group, one of the world’s largest banks, Executive Vice President and Chief Economist at Fidelity Bank and Vice President for Monetary Economics at Chase Econometrics Associates, Inc.  A native of Texas, Dr. Hunt has served as Senior Economist for the Federal Reserve Bank of Dallas. Dr. Hunt received his Ph.D. in Economics from the Fox School of Business and Management of Temple University. Furthermore Dr. Hunt served on the Board of Trustees of Temple University from 1987 to 2010 and is now an honorary life trustee. He received the Abramson Award from the National Association for Business Economics for “outstanding contributions in the field of business economics.” He is a life member of the American Finance Association.  He was a member of the Economic Advisory Board of the American Bankers Association and Chairman of the Economic Advisory Board of the Pennsylvania Bankers Association.  He served on the Monetary and Fiscal Policy Affairs Committee of the National Chamber of Commerce.

TACTICS OF THE FED

“Debt only works if it generates an income to repay principle and interest.”

Research indicates that when public and private debt rises above 250% of GDP it has very serious effects on economic growth. There is no bit of evidence that indicates an indebtedness problem can be solved by taking on further debt.

One of the objectives of QE was to boost the stock market, on theory that an improved stock market will increase wealth and ultimately consumer spending. The other mechanism was that somehow by buying Government securities the Fed was in a position to cause the stock market to rise. But when the Fed buys government securities the process ends there. They can buy government securities and cause the banks to surrender one type of government asset for another government asset. There was no mechanism to explain why QE should boost the stock market, yet we saw that it did. The Fed gave a signal to decision makers that they were going to protect financial assets, in other words they incentivized decision makers to view financial assets as more valuable than real assets. So effectively these decision makers transferred funds that would have gone into the real economy into the financial economy, as a result the rate of growth was considerably smaller than expected.

“In essence the way in which it worked was by signaling that real assets were inferior to financial assets. The Fed, by going into an untested program of QE effectively ended up making things worse off.”

“Monetary policies currently are asymmetric. If the Fed tried to do another round of QE and/or negative interest rates, the evidence is overwhelming that will not make things better. However if the Fed wishes to constrain economic activity, to tighten monetary conditions as they did in December; those mechanisms are still in place.”

They are more effective because the domestic and global economy is more heavily indebted than normal. The fact we are carrying abnormally high debt levels is the reason why small increases in interest rate channels through the economy more quickly.

If the Fed wishes to tighten which they did in December then sticking to the old traditional and tested methods is best. They contracted the monetary base which ultimately puts downward pressure on money and credit growth. As the Fed was telegraphing that they were going to raise the federal funds rate it had the effect of raising the intermediate yield but not the long term yields which caused the yield curve to flatten. It is a signal from the market place that the market believes the outlook is lower growth and lower inflation. When the Fed tightens it has a quick impact and when the Fed eases it has a negative impact.

The critical factor for the long bond is the inflationary environment. Last year was a disappointing year for the economy, moreover the economy ended on a very low note. There are outward manifestations of the weakening in economy activity.  One impartial measure is what happened to commodity prices, which are of course influenced by supply and demand factors. But when there are broad declines in all the major indices it is an indication of a lack of demand. The Fed tightened monetary conditions into a weakening domestic global economy, in other words they hit it when it was already receding, which tends to further weaken the almost non-existent inflationary forces and for an investor increases the value. 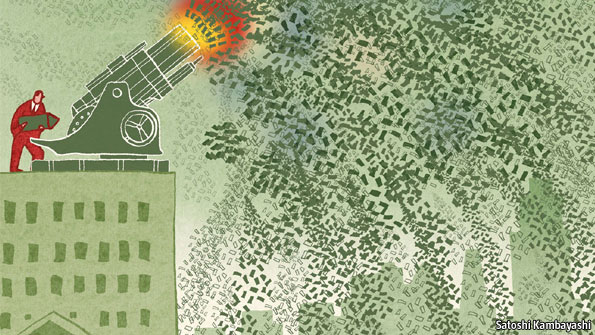 “If you do not have pricing power, it is an indication of rough times which is exactly what we have.”

The fact that the Fed made an ill-conceived move in December should not be surprising to economists. A detailed study was done of the Fed’s 4 yearly forecasts which they have been making since 2007. They have missed every single year.

The Fed begins the year with the high forecast and ts declines each forecast after that and by December it isn’t much of a forecast because you already have 11 months of data. An empirical indication that QE has failed is the fact that their models have relied on them to be indications and the models were wrong which means the policies have also been a failure.

There is a trend that in weak economic times the fed will continue untested experiments. Even though QE 1, 2 and 3 have failed, in dire times they will implement QE 4. But if the Fed resorted to negative interest rates it will have an adverse impact on bank earnings, particularly small banks and greatly harm savers who have already been hurt. Negative interest rates will simply penalize people to a far greater degree. It will have devastating consequences to the money market mutual funds; difficult to see how they would operate at all.

Pushing interest rates in a negative territory will greatly increase the unfunded liabilities of the corporate pension plans. Pension plans will either be dropped or for those already covered it will explode the liabilities causing them to cut expenditures in the real economy to fund the pension liabilities.

“If the Fed went into negative interest rates they would ultimately be required to call in the currency and force people to use their bank deposits.”

We are no closer to solving our indebtedness problem in 2016 as we were in 2009.