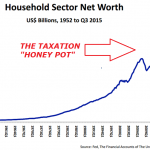 A MASSIVE ‘TAX GRAB’ MUST BE EXPECTED 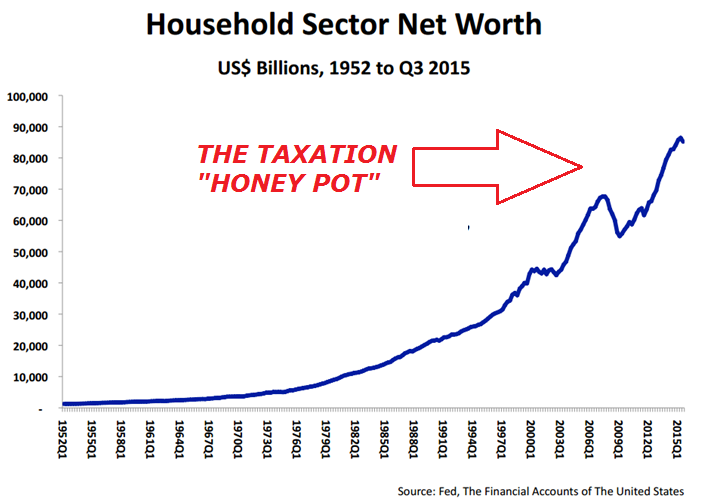 The Financial Repression Authority sees the massive government tax grab already quietly underway accelerating in 2016 in most of the developed economies.

This ‘grab’ will be a desperate political act driven by underfunded, and in a significant number of cases, unfunded public pension which will unfold at all three levels of government, Federal, State and City /Local government. It will be disguised by different focal emphasis and appear to evolve in an uncoordinated manner – but it will occur!

To spot its telltale fingerprints we should expect the following words to become  much more prevalent in the “public narrative” throughout 2016 and to see EACH of these which we explore in this article to increasingly and significantly extract money from taxpayer wallets:

The Wealth Effect is believed by the government to have pushed up taxpayer US Household Net Worth  by $30 Trillion or 55% from the Financial Crisis low.

The US government is coming after that money!  They see it as a “Honey Pot” that can’t be resisted. 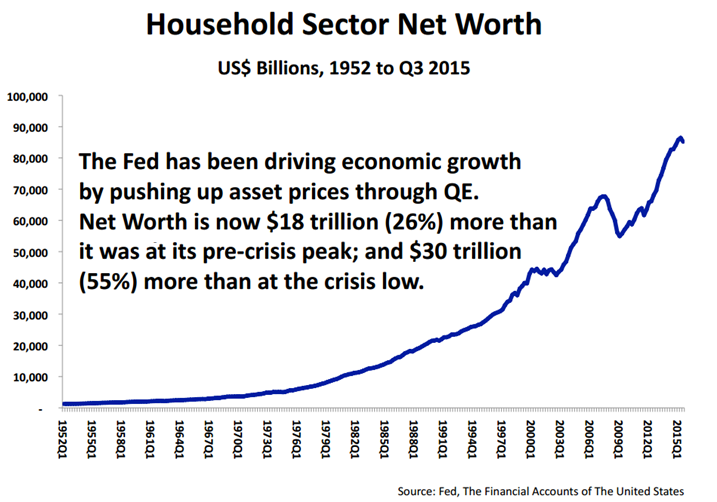 The following is how the Financial Repression Authority expects the government to undertake this ‘grab’. However, never under estimate the government’s abilities to come up with new schemes to finance its insatiable largesse.

Let’s start at the bottom of the political machine by examining what City and Local governments are doing and planning and work ourselves up to the head of this gluttonous and uncontrollable monster.

City and Local government have massive problems with underfunded Pension obligations. Costs for road and water services which have not received adequate financing are also coming due. Administrative, police, fire and teachers’ salaries are all relentlessly climbing along with generous benefits which have long ago been jettisoned by the private sector.

Unlike the Federal government, city and local government cannot “print money” but must cover their costs by primarily Property Taxes or by issuing more debt in the form of muni bonds. The problems have gotten so bad that cities like Chicago have recently been brought to court for inappropriately using bond issues to pay operating costs associated with meeting public pension obligations versus badly needed infrastructure repair. These desperate actions are symptomatic of the pressures forcing the following actions:

Now even a minor violation as reported by our FRA guest Michael Snyder can put a massive hole in your wallet.  For instance, driving as little as 15 miles an hour over the speed limit in Virginia can get you a reckless driving charge that can carry a fine of up to $2500. So why the hefty fines? Well, the law increasing the traffic fines in Virginia clearly admitted why they are so high. “The purpose of the civil remedial fees imposed in this section is to generate revenue.” (Virginia Code 46.2-206.1)” 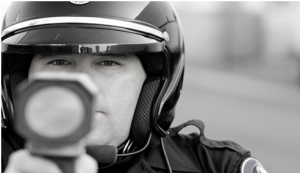 ed approximately 40 million dollars in towing fees and police fines. “Red-Light cameras” have become huge revenue raising tools in many areas of the country.  In Los Angeles, revenue from red-light cameras has doubled from $200,000 a month in 2007 to $400,000 a month at the end of 2009.

Expenses are accelerating due to Federal expectations of preparedness for the War on Terror and the epidemic levels of horrific Public Shootings. The police and first responders have an increasing fiduciary responsibility, however the funding is not coming with it.

“The intense spotlight placed on Ferguson, Missouri in the last year exposed a small-town government engaged in petty larceny on a grand scale. Duly elected officials supervised a police force that regularly shook down visitors and residents to generate municipal revenue. The area’s demographics ensured the victims were mostly poor and black, but similar official theft occurs in white-majority towns all over the nation .. Local governments all over the U.S. are not nearly as accountable to voters as they want us all to believe. They serve as the training ground for politicians who rise to higher office. That’s why higher levels of government are certainly no better and often much worse. People who run for local offices often start with noble ideals. Their ideals rarely survive once elected. A little power creates a little corruption – and usually leads to more.”

Martin Armstrong reports the extent to which this is now reaching as police are going after teenagers who just want to make some pocket money shoveling snow and it isn’t just an isolated incident.  “The police even in Philadelphia are targeting kids as they are in New Jersey. Many towns demand a license with paperwork and fees of $50+ to be paid to shovel snow!”

The list is much more extensive than we are showing here and would take up too much space to show the forms that “new taxation” techniques are taking. In New England for example many towns are now offering nominal tax rebates for seniors and unemployed who volunteer to do community service work that was previously provided by town workers. Some would suggest this is a tax savings but in reality it is taxpayers doing work for the town for free when previously it was part of their local tax (which has only increased even with the rebate).  Is this not in really just another form of taxation?

The taxation problem only gets worse as government budget shortfalls get worse. Many of the methods used at the City and Local government carry over to the State level (i.e. Ticketing, Inspection and Fines). The States have additional methods:

Forbes in their report “The International Monetary Fund Lays The Groundwork For Global Wealth Confiscation”  point out some of the IMF taxation guidance: “”IMF economists know there are not enough rich people to fund today’s governments even if 100% of the assets of the 1% were expropriated. That means that all households with positive net wealth—everyone with retirement savings or home equity—would have their assets plundered under the IMF’s formulation.” This is where the bankruptcy of the debt-mired western world is taking us – “capital controls and exit restrictions so the proverbial four wolves and a lamb can vote on what’s for dinner.”

The IMF report says “There is a surprisingly large amount of experience to draw on, as such levies were widely adopted in Europe after World War I.” The Forbes essay: “And we all know how well that worked out.”

For those who want to know more they need to study PFIC, FATCA and GATCA, all explained in Financial Repression Authority videos by those in the know.

The use of the civil forfeiture power has exploded in recent years:

What happens to the seized property, be it cash, cars, jewelry or something else entirely? When the federal government does the seizing, Meyer writes that the funds go to the Department of Justice (DOJ). The DOJ has an Asset Forfeiture Fund, which then distributes the proceeds for various law enforcement needs.

In the past few years, Washington DC police officers have made more than 12000 civil asset seizures under city & federal laws. In a “Stop and Seize” investigative series by the Washington Post in November 2014 they cover the fact in their sixth installment that “D.C. police plan for future seizure proceeds years in advance in city budget documents  … D.C. police have made plans for millions of dollars in anticipated proceeds from future civil seizures of cash and property, even though federal guidelines say ‘agencies may not commit’ to such spending in advance”. 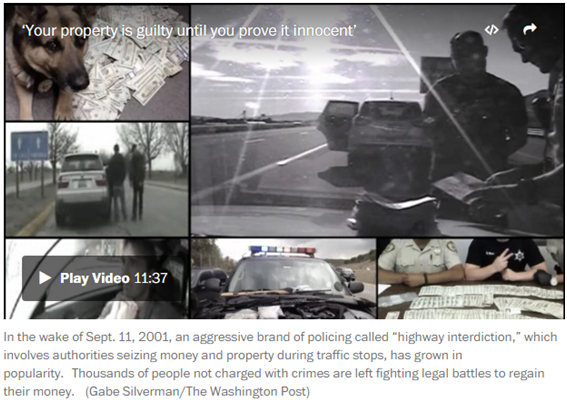 Martin Armstrong cites: “Worse yet, cities need money desperately. They are now including civil asset forfeitures as part of their budget. In other words, police are under orders to confiscate your money for any excuse possible. This was the end phase of the Roman Empire. The army began sacking Roman cities on the pretense they stood against whoever the proclaimed to be emperor. Rome weakened itself and cannibalized its own civilization. This is what government is doing now in the USA.” He strongly warns: “never pick up a hick-hiker in trouble for if they have any drugs, even marijuana, there goes YOUR assets!”

The law lets the  I.R.S.seize accounts on suspicion, no crime required!  A NY Times article frighteningly highlights the growing phenomenon in the U.S. of civil asset forfeitures .. “Using a law designed to catch drug traffickers, racketeers and terrorists by tracking their cash, the government has gone after run-of-the-mill business owners and wage earners without so much as an allegation that they have committed serious crimes. The government can take the money without ever filing a criminal complaint, and the owners are left to prove they are innocent. Many give up.”

This is happening across America but especially in Texas, Tennessee, Michigan where it was reported that “a town of 150 people called Estelline Texas earns more than 89% of its gross revenues from traffic fines and forfeitures. 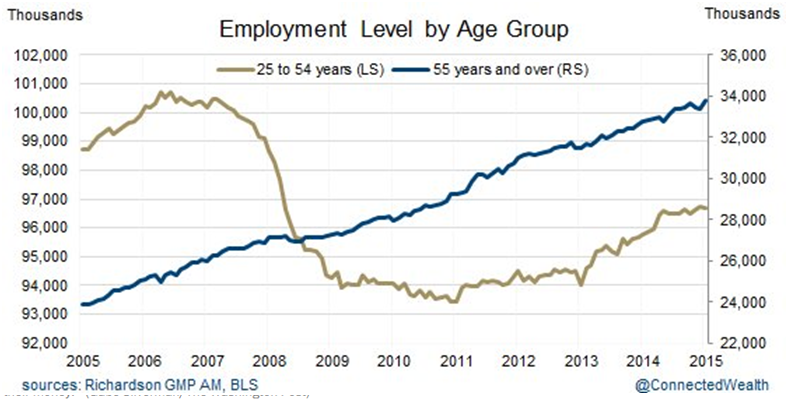 To put all the above in perspective regarding  the degree of taxation we should fully expect, my friend and Macro Analytics Co-Host Charles Hugh Smith wrote this “template letter”.  It somewhat cynically outlines what we should soon expect from the government to help fulfill its escalating pension & healthcare promises to current & to retired government employees:

As you may have read, the costs of fulfilling our pension and healthcare promises to our retired and current employees have soared. As a result, pensions, healthcare and the annual interest due on city bonds (money we borrowed in the past) now consume all tax revenues.

Without additional funding, we will have to lay off all current employees and close City Hall, the libraries, the fire and police departments, parks and recreation, and the rest of the city departments.

To avoid this, we are asking you to approve increases in fees for use and the sale of new bonds to raise desperately needed funding.

The proposed fees for use:

Unfortunately, the new fees for use will only pay a fraction of the salaries of our employees and managers, and so we also need your approval of new bonds:

With your support, the city managers expect revenues to cover expenses by 2096, assuming the city’s functions have been fully automated and there are only 12 employees left managing the servers. Until then, please support our efforts to grow the city out of its budgetary hole.