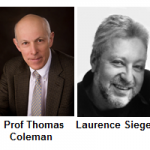 FRA’s Co-Founder Gordon T. Long interview Thomas Coleman and Larry Siegel on their paper, The Hidden Cost of Zero Real Interest Rates. Thomas Coleman is the executive director of the center of economic policy at the University of Chicago Harris School of Public Policy and has spent most of his career in the financial industry mainly in research, trading and model development for derivatives and trading other fixed income derivatives. Larry Siegel is the research director at the research foundation of the CFA institute and also the senior advisor at Ounavarra Capital. He is also an author and public speaker.

$1 TRILLION or 5% per Year Taken From US Savers

On financial repression Larry describes it as the use of market prices, in particular interest rate to transfer resources from party A to party B in this case from savers to government. According to him the government can then borrow at rates that are extraordinarily low and not a reflection of the true value of the money to the lenders.

On the paper, Thomas explains that there are 3 highlights. The First is detailed from a historical perspective. He says that from looking at history we can see that nominal rates are low by historical standards. According to him what really matters are real interest rates. He mentions that when taking into account nominal interest rate and inflation we currently have real interest rates as minus one percent. This means that the real value of saving in a zero rate deposit would be a loss in value at about one percent a year.

Thomas mentions that one of the costs of a negative real interest policy is that negative real rates potentially distort decision making. He explains that the real interest rate is the price that determines how much we consume or how much we want to consume, the price of consumption today versus consumption in the future and how such a policy disrupts such decisions. Thomas stresses that it is the real interest rates that matter and that one of the reasons nominal rates has gone down below zero especially in Europe is because inflation has trended lower.

“Businesses decide whether to undertake a project based on whether the return they expect to make on the project is greater than the cost of capital. If you force the apparent cost of capital low enough through a low interest rate policy a lot of projects will look good and profitable that aren’t if you applied a normal cost of capital to that product so this motivates businesses and consumers to do a lot of things they shouldn’t be doing”.  –Larry

On trying to understand the wealth transfer from savers to borrowers, Thomas likens it to an implicit tax. He says that it is more than just a transfer from households to government but also from one set of households to another, from older to younger there by reinforcing the idea that negative real interest rates are potentially a distortion to  the price of consumptions today and consumptions tomorrow and also what we save today versus spend today. The troubling thing with all this according to him is the potential distortions that arise as a result of a negative real interest policy.