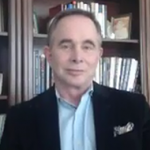 “My recent book ‘Code Red’ was really all about Financial Repression. We were talking then about Currency Wars which has come to be played out. We were talking then about Central Banks driving down interest rates on savings to force retirees and savers into other types of investment and take more risk. They want them to move more out onto the risk curve which the central bankers believe will stimulate the economy. What they don’t understand is that taking it from savers, it takes it from their consumption behavior patterns.”

They are robbing from Peter to pay Paul, but in this case Paul is the banks and Wall Street Interests. It is not for the guy on main street.

“When the central banks start messing around with the markets they change the price of money and it has all sorts of unintended consequences!”

“This period of zero interest has created an extraordinary set of malinvestments as a result of unintended consequences. One example is they have money real cheap for Texas oil men. When you make money cheap for Texas oil men they punch holes in the ground. They moved out ‘onto the edge’. It created employment and drove rig prices up.” … “It changed behaviors, it changed how we think the world works – we will see how it works out!

“Investors have been moving into high yield (HY) bonds. We are issuing risky HY bonds that are much more risky than 2007 with less covenants. Its like we didn’t learn anything! People feel they have to have more yield and can’t survive without it. We have bond funds where people are chasing longer duration bond funds. If interest rates on the long end of the curve grows by 1%, these longer duration bond funds (2 of the largest funds in the world) could lose 20%. Investors in 401K’s who see 20% losses will panic and hit the sell button. Because we wrote a bill called Dodd-Frank, which basically says you banks can’t get involved in providing liquidity to this market because we don’t want you to take the risk – they have shoved the risk to investors who will all try and get out the door at the same time!”

“It would not surprise me in the next crisis (and it will happen) to see the Federal Reserve step in and start directly funding Mutual Funds and ETFs trying to provide liquidity into a panicking market!”

As John wrote in “code red” he sees a continuing strengthening in the US$.

“The dollar is going to get stronger than any of us can even imagine!”

“The BIS cites that emerging markets have borrowed some $9T in US$ terms.” As emerging markets weaken they must pay their loans in appreciating dollars. There is presently a mad scramble ensuing to cover this carry trade. Mauldin believes it will get even worse because of Japan.

“Japan is just continuing to print money. They are just going to print more money! When that doesn’t work they will print even more money. They have a sovereign debt crisis that the only way they can solve it to trash their currency and to move the debt they have generated from banks and pension funds unto the balance sheet of the central bank. That is their only solution. Today the 10 Year JGB market (it used to be one of the most liquid in the world) if the BOJ is not buying there are no trades! That is just shocking and is going to put pressures on currencies all over the world!”

“This is movie we just don’t believe will end well!”

“Investors at this stage should start to consider what is their exit strategy!”

… and much more in the video discussion…. John gives his advise on what things investors must now be concerned with and how they should be preparing.